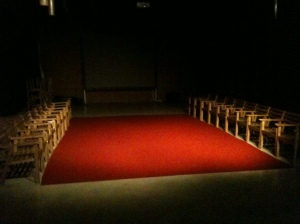 From November 22nd to February 28th 2014, the exhibition Margin of Error will takes place in Tasneem Gallery of Barcelona.  This is the first public intervention of the investigation group Magnetic Declination.  Margin of Error is critical re-assessment of past and present day coloniality focusin on the dominant narrative construction of historical events such as the “Discovery” and the Conquest of America, as they are reflected in text-books used in Spain.

The basic audiovisual structure beneath the Margin of Error project emerges from the deconstruction of traditional history class into a series of cinematic fragments depicting alternative exercises, from the staging of scenes based on colonial imagery, to debates on dominant concepts in history lessons dealing with colonialism. These audiovisual fragments are arranged anagrammatically, in conjuction with other collectively authored assemblages. The exhibition builds an experimental, non linear narrative that challenges teleological notions of historical “truth” and destabilizes the visual and textual discourses.

This audiovisual production and exhibition is a production by Tasneem Gallery in collaboration with Matadero Madrid, with the support of Absolut. 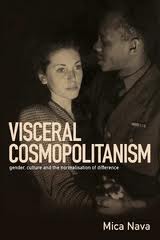 Visceral Cosmopolitanism: from Alterity to Mere Difference
Prof. Mica Nava
Mica Nava will discuss some of the conceptual and historical issues raised in her book Visceral Cosmopolitanism: Gender, Culture and the Normalisation of Difference and in the shorter readings listed below. This focuses mainly on the UK twentieth century metropolitan experience and is concerned with cosmopolitanism as a ‘structure of feeling’ — as an empathetic, inclusive and sometimes eroticised range of feelings and attitudes towards others, otherness and the foreign — which finds expression in vernacular and domestic forms as well as in commerce, social science and the arts.
The paper will track changes in this cosmopolitan mood from a counter culture of modernity a century ago to part of quotidian life today — hence the shift from ‘alterity’ to ‘mere’ difference, to the normalisation of difference, in contemporary urban UK culture. In the process the paper will draw attention to the crucial part played by women in the historical formation of the present. Similarly it will highlight the unexpected influence of twentieth century British class relations on the relative
diminution in the significance of epidermal difference. The paper will also look at the geopolitical and historical specificity of the meanings of race and difference in UK and contrast these with other similar contexts in Europe and the Americas.